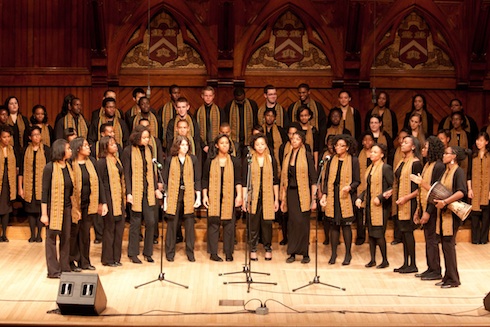 The Kuumba Singers of Harvard College

The Kuumba Singers of Harvard College was founded in 1970 by Dennis Wiley and Frederick Lucas, two African American undergraduates of the Harvard Class of 1972, with charter members from both Harvard and Radcliffe Colleges.  The choir’s first director was Dr. Hubert Walters, who taught “The History of Black Music,” an early offering of what is now called the Department of African and African American Studies.  While Kuumba, which means “creativity” in Swahili, has grown to become the largest multicultural organization at Harvard, its mission, to celebrate the creativity and spirituality of black culture, has not changed.  Kuumba is an integral part of the Harvard experience of the many students who have sung with the choir over the past forty years, as well as of the thousands of students, faculty, and community members who have become a part of the Kuumba family by attending Kuumba's major concerts, smaller musical events, and other special programming like Kuumba's annual Black Arts Festival.  The Kuumba Singers’ performances integrate the full range of black music from Negro spirituals, anthems, and African folk songs to contemporary gospel.  The choir has sung in cities across America and abroad for audiences that have included dignitaries such as President Nelson Mandela and Archbishop Desmond Tutu.  The current group of Kuumba Singers is roughly 100 members strong (most members are students from the College, but consistent with Kuumba’s history, many hail from graduate programs across the University), and alumni number over 1,000.

To learn more about the Kuumba Singers, visit  www.kuumbasingers.org.